When Coca-Cola washes its hands of the ocean plastic problem, this is where the problem washes up

Last week I was standing over a pile of plastic Coca-Cola bottles, on a remote beach in Mull on the west coast of Scotland.

What awful littering, many people will say. Well, when you see this on beach after beach, as I have, you begin to wonder whether the problem isn’t really individuals, but the system itself and the choices that major drinks companies make.

Almost half of the 600 billion plastic bottles manufactured globally each year are thrown away after a single use, with billions ending up in the environment. Since you’ve been reading this article, for example, Coca-Cola has produced another 50,000 single-use plastic bottles.

The beaches on Mull and the coastlines of the western isles are some of the most breath-taking in the UK – don’t let anyone ever tell you the UK doesn’t have proper beaches. And when I say the beach was remote, the walk to it from the nearest road takes around an hour and a half, trekking over fields, hills and bogs. So it’s not exactly a tourist hotspot.

But while these coastlines should be as nature intended – pristine, rugged and beautiful – they’re more often than not the sites of a jaw-dropping amount of plastic pollution, as oceanic processes bring wave after wave of plastic from the Atlantic.

I’ve just been on the Greenpeace ship the Beluga II, as part of an expedition around Scotland’s coastlines to research and document the impact of plastic pollution on our oceans and wildlife. The beach I visited had recently been cleaned up by the Marine Conservation Society, who we’ve teamed up with during our expedition. The stacks of plastic waste awaiting collection were phenomenal in scale and there was even more plastic washing up. In the dunes surrounding the beach, you could hear the crackle of plastic bottles just beneath the surface – bottles so embedded in the dunes that many were matted and entwined with the foliage.

The problem is acute, and it’s one of the biggest threats facing our oceans. Big pieces of plastic can choke and entangle marine life, with studies showing that 90% of seabirds and one in three turtles have eaten plastic. The UN’s environment programme has said that hundreds of thousands of marine mammals die every year because of ocean plastic pollution. These big pieces then break down into microplastics, are eaten by marine life, and can even work their way up the food chain to humans consuming seafood. 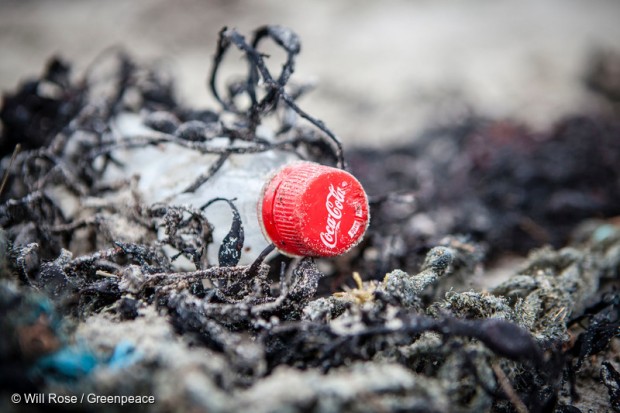 Fortunately, it’s quite easy to see who’s responsible. Companies like to put their names on things so that people make quick identifications with the brands, build positive associations with the companies, and develop brand loyalties.

But funnily enough those companies are quick to disassociate themselves from these same products when they end up choking marine life or polluting a beach.

Walking along some of these plastic-strewn coastlines around Scotland was like a who’s who of big soft drink companies: Coca-Cola, PepsiCo, Nestle, Danone, and AG Barr, which makes Scotland’s drink of choice, Irn Bru.

We found a dozen or so Coca-Cola bottles in just a 30 minute look around this remote beach in Mull. Imagine that carried out on every beach around the UK. And the stuff on beaches is just the tip of the iceberg. Much more of the plastic is carried into the sea, where it remains: out of sight, out of mind. 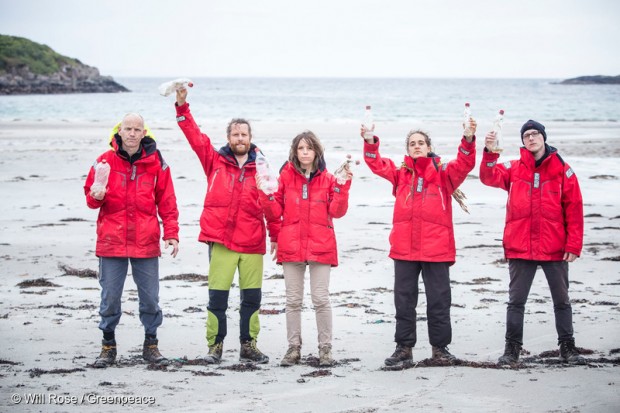 These multinational corporations blame consumers for littering their products, as if it were consumers that designed the bottles to be used once and discarded, as if it were consumers who were demanding the use of virgin plastic not recycled content, and as if the companies themselves were doing everything they possibly could to stop their packaging from ending up in landfill, on beaches and in the sea.

Unfortunately none of those things is true. Companies like Coke are producing throwaway bottles because it’s easier than innovating and adapting to reusable bottles and refillable systems. They’re using virgin plastic rather than recycled content because it’s cheaper, given the low oil price. And rather than taking responsibility for the environmental impact of their products, companies like Coca-Cola have actually lobbied against initiatives which would help to increase collection rates like Deposit Return Schemes.

Coca-Cola’s running an advertising campaign on social media – #ShareaCoke – asking people to post about the Coke they’re drinking. We thought we’d do something similar. Every time you see a Coke bottle in the environment – in the street, on the beach, in the countryside, anywhere it shouldn’t be – share it with the hashtags #EndOceanPlastics and #ShareaCoke. Because sharing is caring. And we’ll keep sharing until Coke starts caring

Hi, I'm Luke and I'm a Press & Communications Officer at Greenpeace UK, mostly working on ocean plastic pollution, and I've recently done global communications for the Protect the Antarctic campaign. If you want to know more then follow me on Twitter: @luke_mas.

Other posts by Luke Massey

Are basking sharks eating plastic? We went to find out.

“Basking sharks!” At 5am, these words shatter the silence in the sleeping quarters on the lower deck of the ship. The crew burst into life, wrestling on clothes, cameras, binoculars. Up on the helm, eyes pace back and forth across the expansive blue of Gunna Sound – a known feeding… Read More