Why is everyone talking about whale poo?

Whales are special. No, not for any stereotypical hippy la-la reasons, this is *science*!

Commercial whaling was bad news for whales, killing and removing millions of large whales from the oceans to turn them (mostly) into oil. But the impact of that whaling is only now being understood for the rest of the oceans.

Whales are a big deal in the ocean. They’re big, they eat lots, poop lots, migrate far, dive up and down, live long, and ultimately they die. Those things might not seem that remarkable but cumulatively they add up.

Let’s start with poo. Scientists love poo. It’s one of the easiest ways to non-invasively study animals. At a recent conference on ocean conservation I’m pretty sure about half of the presentations involved poo-related studies: whale poo, shark poo, penguin poo, fish poo, and so on. Whale poo is big. They eat lots, so there’s lots of it. It’s in liquid form so it basically disperses nutrients straight back into the ocean – which is great news for the phytoplankton, the tiny single-celled plants that are the basis of everything in the ocean, including fish. So more whale poo equals more fish! 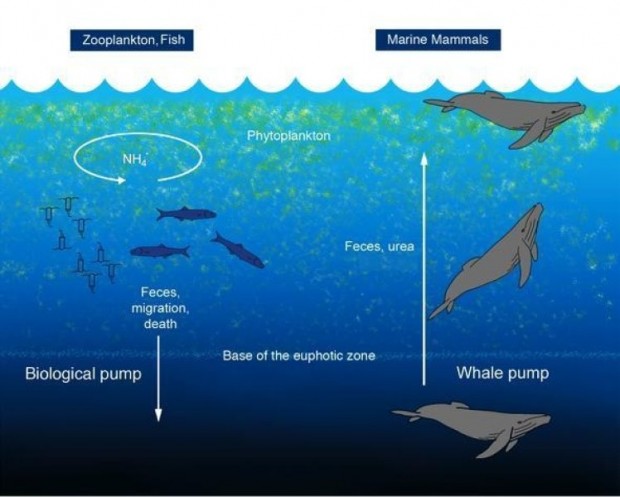 Migration next – and some whales take this very seriously. Most of the world’s big whales migrate pretty far. Usually between warm tropical breeding areas and cold feeding areas nearer the poles. That means they are moving between entirely different ocean areas regularly as they feed, grow and breed. It takes a whole ocean to make a whale.

They move vertically too. That doesn’t seem like a big deal but deep-diving whales like Sperm whales or beaked whales that plunge to the depths to snack on things like squid are recycling nutrients between the deep sea and the surface where they catch their breath (and maybe have a poo).

Whales are survivors. Which is just as well when they’re up against humans. As big mammals they live long lives, with blue whales and orcas living to over 100 years given the chance, and bowhead whales reportedly reaching 200 years old. That means they store up resources, nutrients and carbon in their own bodies. Whales are swimming carbon sinks!

And sink they do. Once a whale dies, the vast majority of them end up on the ocean floor. That might be a long, long, way down and far from land. Just as a massive old tree falling in the forest decomposes and fertilises the ground around it by releasing its nutrients – so do dead whales. ‘Whale falls’, as they are delicately called, support whole ecosystems of critters that snack on them for a long time, picking them clean and, in turn, recycling those nutrients again across the ocean floor.

All in all, whales are pretty awesome for the oceans, and for us humans too.

The ‘whale poo resolution’ being discussed at this year’s IWC meeting is about recognising the vital role that whales play in supporting and regulating the oceans’ ecosystems. It’s probably time we started appreciating just how amazing and important they are.

Other posts by Willie Mackenzie

Our oceans are massive and unlike most places on land, they don’t really have borders. Animals, water (and sadly now plastic) all move freely across our global oceans. Because of this, some people have asked if ocean sanctuaries are an effective way of protecting our… Read More

Why commercial whaling should just be found in history books

Whales are amazing. Yet today they face a growing number of threats from us humans, from plastic pollution to climate change – so the one thing we really don’t need to be doing is killing them for profit. Commercial whaling was stopped by… Read More

The Scottish Government has just announced it will block controversial proposals for a new industry into Scotland’s coastal waters – mechanical kelp dredging. But why do we care about kelp anyway? Kelp is the biggest and most abundant seaweed around our coasts. It’s found in cold seas around the world,… Read More