How Scotland’s marine wildlife is in danger from plastic pollution

Scotland is the envy of the world with its rich waters teeming with wildlife and spectacular coastlines and beaches. But it’s increasingly at threat from the scourge of marine plastic pollution.

We’re halfway through our scientific voyage around the shores of Scotland to document and investigate the impacts of plastic pollution on Scotland’s iconic wildlife. It’s incredibly shocking that up to 12 million tonnes of plastic pollution enter our oceans every year. And once it’s there it can have a devastating effect on wildlife. Animals can become entangled in it or mistake it for food and ingest it. Studies show that 90% of seabirds and 1 in 3 turtles have eaten plastic, with gruesome consequences.

On our voyage, we’ve seen evidence of plastic pollution on remote Scottish beaches, in seawater samples we have collected and in seabird nests. It really brings home the scale of the plastic pollution threat on our oceans and wildlife. But as horrible as the images of wildlife living with the scourge of plastic pollution are, it is also important to remember what we are fighting to protect.

Scotland is home to over 40,000 marine species and a key part of the trip has been to visit the sites that they call home and bear witness to the impacts plastic pollution is having on them.

At the beginning of our expedition, we had the pleasure of visiting various seabird nesting areas. The Bass Rock is host to the world’s largest colony of Northern gannets with more than 150,000 calling it their home. Northern gannets are the largest seabirds in the North Atlantic with a wingspan of up to 2 meters.

We discovered a high level of plastic pollution threatening this iconic colony, with plastic bags, packaging, bits of old fishing gear and even crisp packets strewn across the island and surrounding eggs in nests. 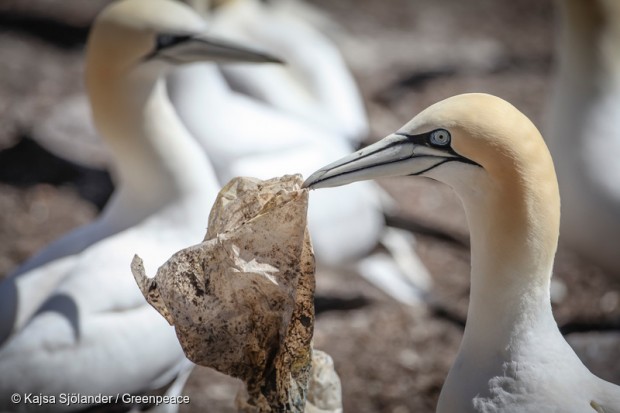 Puffins are one of the most distinctive seabirds with  their brightly coloured bills. We visited the largest colony on the UK’s eastern coast on the Isle of May. Puffins are not only very cute but have really interesting breeding habits.

Unlike most seabirds, puffins live in burrows in short grass at the top of cliffs. During the breeding season, they lay an egg at the end of the burrow. The chick remains in the burrow until it is independent and ready to go in the sea. 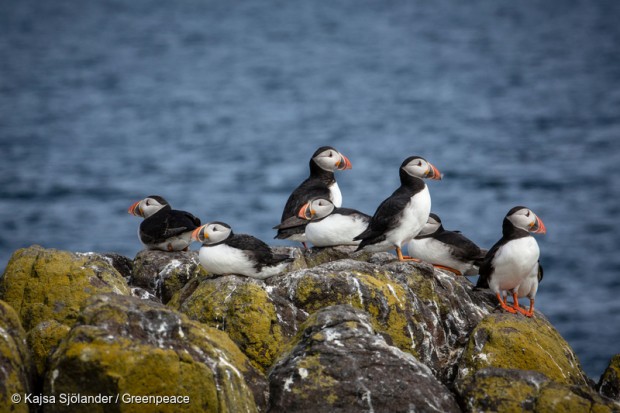 It’s not just seabirds that we’ve encountered on our expedition. We’ve also seen seals, dolphins and porpoises. This should come as no surprise as Scotland’s seas are home to the world’s most northern pod of bottlenose dolphins, as well as a third of the world’s grey seal population. In fact the Isle of May has one of the largest grey seal breeding colonies in the UK. The nursery is so large that the island is closed to visitors from 1 October until Easter to prevent disturbance of the 2,000 grey seal pups born there. 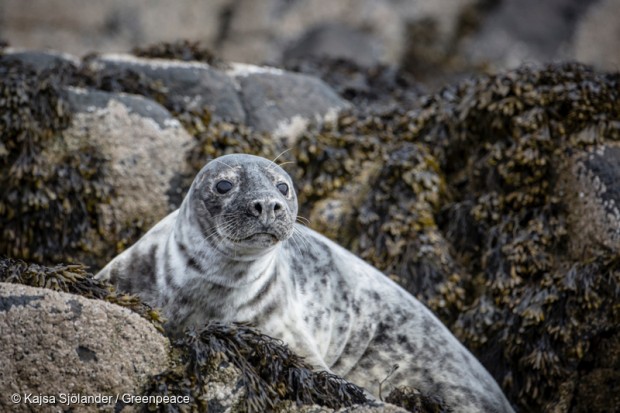 Harbour porpoises are one of the smallest marine animals. They are nicknamed the “puffling pig” because of the puffing sound they make when they surface from under the water. Scotland’s Hebridean waters hold the highest number of harbour porpoises in Europe.

Harbour seals are found in various parts of Scotland including the Isle of May. Their babies are referred to as pups and can weigh up to 35lb at birth! They also are able to swim and dive shortly after their birth. We found seals whilst on the Isle of May but also ran into some more near Mull.

Seals are sadly at the front line of the marine plastic pollution danger. They can get snared and tangled in plastic causing starvation, laceration, infection and suffocation.

Scotland is probably the best place in the world to see basking sharks. These prehistoric marine animals  are the second largest fish in the world. They feed by opening their mouths and filtering water through their teeth, at a rate of 1000-2000 tonnes of water per hour – to ingest the  plankton they feed on. We’ve collected dozens of sea surface water samples to analyse for the presence of microplastics. If we find them, it means it’s likely that basking sharks and other filter feeders will be ingesting them too.

To some, they are quite frightening as they slowly swim through the water, mouth wide open as they filter feed. But they are actually very docile creatures and are not harmful to humans.

They also can be very difficult to spot! But we were lucky enough to find some after a three day search. Basking sharks are in incredible sight to behold and really bring home the reason that we are on this expedition – to protect marine life and our oceans from plastic pollution. 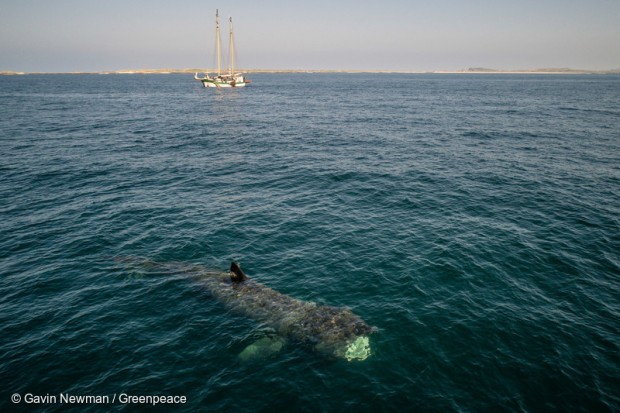 And there’s so much more

Scottish waters are also home to a third of the world’s whale and dolphin species, and have some of the finest marine habitats in Europe, which include rocky reefs, soft corals, sea fans and sponges, sea grass, flameshell and horsemussel. They all provide refuge for young fish and shellfish, as well as spectacular coldwater coral reefs.

Plastic pollution threatens this all, and this expedition is revealing that it’s already harming the oceans and iconic wildlife on our own doorstep.

What you can do

The solution is to prevent the problem at source, and stop the flow of plastic into the oceans in the first place. With 16 million plastic bottles being dumped into our environment in the UK every day, soft drinks companies, governments and individuals can make real progress to tackle the crisis  – if we demand it!

I am a campaigner on the oceans team.

Other posts by Tisha Brown

Can we reduce plastic packaging and reduce food waste?

Plastic packaging has been in the news a lot lately. After Blue Planet II, many people have been concerned about the amount of single use plastic that is produced and subsequently thrown away. Currently a truckload of plastic enters our oceans each and every minute where it becomes… Read More

This Earth Day We Asked Supermarkets to Reduce Their Plastic Footprint

As part of our campaign for supermarkets to get rid of throwaway plastic packaging, we celebrated this year’s ‘End Plastic Pollution’ themed Earth Day by taking action in stores around the country. With a truckload of plastic entering our oceans every minute, up to 12.7 million tonnes of… Read More

This is a guest blog written by Amy Meek, co-Founder of Kids Against Plastic Our desire to make a positive change began about two years, when we were being home schooled by our parents. We were taking a break from the monotony of normal life, travelling around the UK and Europe… Read More